A snorkeler and scuba diver from the age of five, Dr Juan Felipe Torres traces his love of nature to marine adventures with his parents and brothers off the coast of Colombia in the Caribbean Sea. His record-shattering solar innovation can also be traced to the ocean, but it goes back a bit further than that.

By mimicking the bumpy, light-trapping morphology that evolved in stony corals 240 million years ago, Torres and his research team at ANU — together with industry partners in Japan and Australia — have invented a new surface coating for harvesting solar thermal energy. The coating can withstand the concentration of more than 1000 suns and temperatures above 850° C for many years without significant degradation. 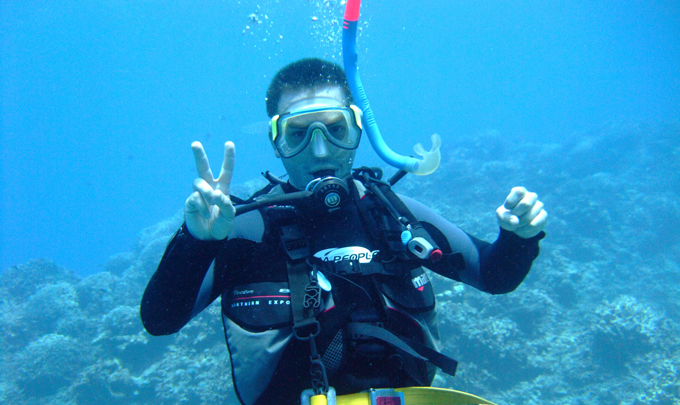 The new coating will help solar thermal technologies position themselves among other renewables and help replace fossil fuels, reduce global warming, and in the process preserve the coral colonies that make up the Great Barrier Reef of Australia.

The research will soon be featured on the front cover of the impactful journal Energy & Environmental Science (Volume 15, Issue 5). Dr Joe Coventry of the School of Engineering, Ms Kaoru Tsuda of Nano Frontier Technology in Japan, and Mr Kurt Drewes of Vast Solar in Australia spent more than four years collaborating with Torres on the project, which was funded by the Australian Research Council (ARC).

Too hot to handle

Concentrating solar thermal (CST) plants collect energy by adjusting hundreds of mirrors to concentrate sunlight onto a receiver that converts the solar radiation into thermal energy. The heat can be economically stored in molten salt, then used to power electrical grids and produce steel.

Uptake of CST has been slower than that of solar panels and wind power due to its higher cost, and one of the cost barriers, Torres said, is caused by the degradation of the coatings on solar receivers. At present, the state-of-the-art coating, which was developed by NASA for the Apollo program, starts to degrade at 700°C.

“It breaks down every few years. So, we need to stop a huge plant to repaint the surfaces,” he said. “And they aren’t easy to paint.”

Solar thermal receivers can be as large as billboards are mounted as many as 200 meters above the ground. 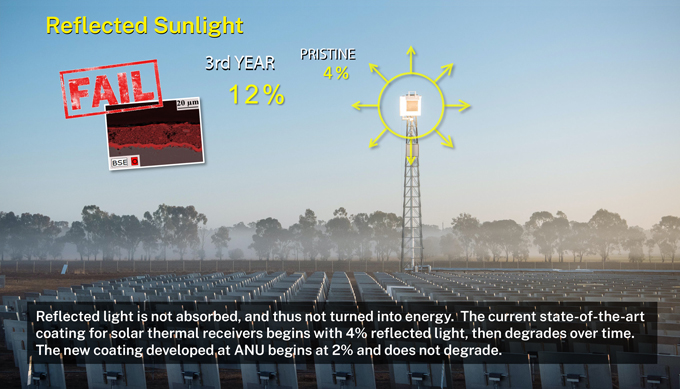 The operating temperatures of solar receivers are from 600 to 800 °C — too hot for existing coatings to handle without regular and costly maintenance. But the new coral-inspired coating has been tested in furnaces above 900°C.

“It’s so durable that we can age it at temperatures above the operating temperature for months and months and we don’t see any optical degradation,” Torres said. “We have already applied this coating on a commercial solar thermal receiver and think it could outlast the lifetime of the plant.”

The availability of a coating that doesn’t degrade over time will allow concentrating solar energy plants to run continuously and thus increase the profitability and scalability of CST energy technology. In addition, the coral-inspired coating reduces light reflection by half, compared to the state-of-the art. So, it absorbs 98% of the sun’s energy instead of 96% with a falloff to 88% after three years.

This will become increasingly necessary to complement large solar panel farms that don’t have storage. CST is heat and not electricity. Hence, it can be stored and then deployed at periods of high demand (at night, for instance) or during periods of cloud cover or low winds.

Corals need sunlight for photosynthesis because they have a symbiotic relationship with algae that lives within them. The coral provides shelter for the algae, and the algae secretes nutrients that allow the coral to thrive.

Early in their evolution, coral colonies were restricted to shallow waters where sunlight was plentiful. But as they moved into greater ocean depths, they evolved bumps and protrusions to improve light trapping via multiple reflections within their structure. 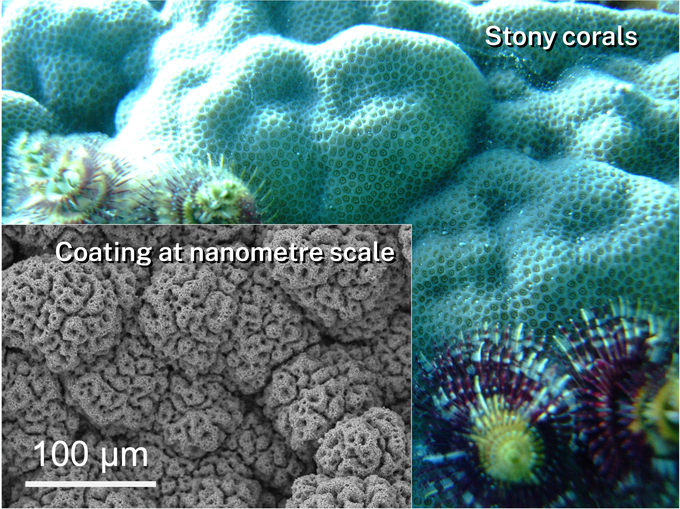 “To contend with the attenuation of the sunlight in deep waters, they evolved a different morphology,” Torres said. The bumps and protrusions were “great for light absorption, and they also provided protection against strong ocean currents”.

Four years ago, when Torres was asked by scientists at Nano Frontier Technology to explore the effectiveness of their coatings with tiny protrusions, he noticed a similarity to the structure of coral.

“And then we took three dimensional scans, 3D scans of corals and started analysing the corals optically doing ray tracing and modelling light-trapping effects within those coral morphologies,” Torres said. “Why not learn from that? Why not learn how light trapping works in nature and apply to an engineering problem?”

Torres held up a small black tile painted with the new coating. At first glance, it appeared to be flat. Then, he rotated the tile to a tangential angle. “You’re able to see the little shades,” he said. “Those shades are produced by the coral-like protrusions.”

Most of the engineering, however, can only be seen with very advanced microscopy techniques. “We mimic the coral’s morphology at different length scales, including micropores. And we also have nanoscale features, because we need to have light trapping at all these different lengths to produce an optically robust and durable coating.”

The ratio of largest to the smallest length scale in the hierarchical coating design is about 800 to one. “We have 100-micron little corals in our coating morphology,” he said.

Torres said he would like to teach his children, ages 1 and 3, to scuba dive just as his father taught him. Decades ago, when he first learned about the impacts of climate change on Australia’s Great Barrier Reef, he feared that his grandchildren might not be able to see it. Now he fears the same might be true for his children due to recent mass bleaching events.

“As temperatures go up just a few degrees, the algae that’s inside the coral starts secreting some things that are bad for the coral, and the coral rejects it. That’s why the colours disappear. And after a while, they die,” he explained.

Torres said that his two passions, science and nature, developed independently. But, in joining the fight against climate change, he uses one to save the other.

“We’re learning from corals to invent more profitable ways of producing green energy. And that in turn can reduce the greenhouse emission, reduce the risks of global warming, and help save nature including the corals.”

Australia can be the Saudi Arabia of the clean energy economy

A large portion of the world’s energy grids are fed by boiling water. The force of steam turns turbines to produce electricity. When the heat that creates the steam is produced by burning coal or gas, the process creates greenhouse gasses and contributes to global warming. If the heat comes from solar energy instead, greenhouse gases are eliminated.

Researchers are working on a mix of renewable energy technologies for use in different applications, Torres said.

“Solar panels change energy from the sun directly into electrons, into electricity, something called the photoelectric effect,” Torres said. “The advantage is that it doesn’t require much space. We can put solar panels on the roof of a house.”

But for industrial processes, such as steel production, or electricity to power major cities, concentrating solar energy stored as heat is more effective.

The sun has a vast array of wavelengths. From the ultraviolet to the infrared. The materials used in solar panels can only absorb a particular range.

“So, there’s a bunch of wavelengths that are not being actually used. That’s why the efficiency is 16% to 22% for commercial photovoltaics,” Torres said. “Our technology can convert the whole wavelength range into heat. It’s not electricity, it’s heat. Its thermal energy conversion is more than 90%, which is huge.”

“For electricity production on a large scale, especially at night, when there is a high demand, it is better to have a large-scale CST plant.” 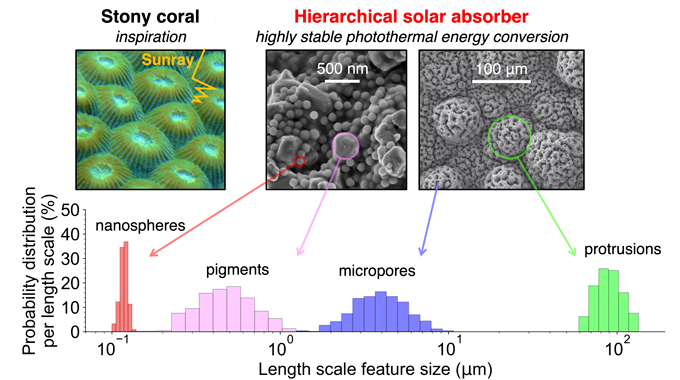 Concentrating solar power can be stored more cheaply and effectively compared to photovoltaics which requires electrochemical batteries for storage.

“In electrochemical batteries, the amount of energy that is stored per unit of weight is very little,” Torres explained, adding that there are “life cycle issues,” citing phone and laptop users who complain of batteries that die out over time.

“Thermal energy storage is cheap. You can store it in rocks or molten salt, materials that are abundant and accessible in nature,” he said.

On the other hand, thermal energy cannot be exported efficiently, as there are conductive thermal losses through the tank walls. That’s where another of Torres’ projects, together with Professor Larry Lu, comes in. Hydrogen energy, they have found, can be stored in an extremely stable manner as microbubbles enclosed by atomic-size, layered materials.

“There is no leakage even in one-year periods. So, for exports, it’s better to use the heat to drive hydrogen production, which we will be able to store more stably. Furthermore, exporting as hydrogen is more useful for the end user, because hydrogen can directly power devices using fuel cells, such as vehicles.”

It’s the combination of these and other technologies that will present the solution for Earth’s climate, as well as the economic concerns that motivate continued dependence on fossil fuels such as coal.

“We can turn Australia into the Saudi Arabia of the green energy economy,” he said. “That’s what the mix of renewable technologies means. It’s about enabling the commerce of future commodities such as green hydrogen.”

A smile appeared on Torres’ face as he considered the present day inflection point in the context of geologic time.

“It’s an interesting story because oil is actually concentrated sunlight, through leaves and animals that lived millions of years ago. But all that carbon that had been stored there, we’re putting in the atmosphere,” Torres said.

“Once we see our own natural resources, such as the Great Barrier Reef being damaged by climate change, and our own livelihoods being destroyed by floods and bushfires, we need to do something about it.”